We are creatures of habit and my mornings typically start the same way.  I will wake up between 6-6:30, stumble to kitchen, get the coffee brewing, stumble to the bathroom, pee, then I stumble back to bed and lay there until I hear the coffee finish brewing. I get up and make the bed then I make my one cup of coffee which is one packet of stevia and some almond milk. I head to the living room and sit on the couch, turn on GMA and my laptop, and let the coffee get into my veins. I will always look on FB to see what happened during the night that I may have missed.

July 2 was no different and when I opened my FB page the morning timeline popped up with “On this day…” memory and that morning my post from 2015 popped up as the memory. I opened the post and read through it. It was a longer post than normal because it was that day in 2015 with which I was diagnosed with nodes on my vocal cords. As I read it, there was a sense of uncertainty because all I knew was there were no allergy problems and the nodes should heal up with vocal rest and a lot less talking.

I sat there on the couch reading that post with tears welling in my eyes. Had 2 years really gone by? Wow, in 2 years I went from something very common in singers, performers and public speakers. To being diagnosed with cancer on the left vocal cord. Shit. What a crazy ass journey this has been.

What was wrong with me? How did that all happen? Why was it happening? Was there a reason it took that long? When will it be over? Will it always be a struggle? Those questions resurfaced that morning. I have not asked myself those questions in a long time and was not thinking they would come back.

We each have our own struggles and joys in this life. I always say it is how a person reacts to those struggles and how they celebrate those joys that make up a persons being.  The last 2 years have not been a joyful ride for me. I would be lying to you and myself if I said otherwise.

I am going to break down what it has been like the last two years by answering each of those questions and how they have shaped my outlook today on this journey. Some will show my vulnerability, my raw emotions, my fears, and my heart.

What is wrong with me?

Let’s back up to early 2015. I was hitting my stride with my health journey. I had dropped around 80 pounds by doing Barry’s Bootcamp. I loved going there and taking those classes. Seeing how I had changed physically gave me more confidence and a feeling of doing something extraordinary for someone who has always battled weight and a sense of worth. As 2015 progressed, I was having vocal issues with sounding hoarse and scratchy. I said my inner Bea Arthur was shining! I attributed it to allergies and sinus infections. I would go to the walk in clinics and they would tell me I had a sinus infection and I was prescribed antibiotics. I went on a few rounds of antibiotics and nothing seemed to be helping. I bought the neti pots, snorted warm salt water, drank vinegar, hot teas and honey, and even had a few hot toddy’s here and there.

I went to an ENT that someone recommended and this Dr. scoped my throat and said I had the nodes on my cords and put me on three weeks mandatory vocal rest followed by a surgery to strip the cords. I didn’t feel to comfortable with this diagnosis because this Dr. did not take any time with me to discuss any reasons why they were there how they developed or how he came the conclusion of 3 weeks rest and a surgery would clear it up.  I remember telling my Mom that I was going to go get a second opinion to make sure I was properly diagnosed especially since I felt I had been given a wham bam slam and that was it.

I went back to work and was talking to others about what he wanted to do. It did not set right with me and I wanted a second opinion from an ENT who worked specifically within our Broadway/Off-Broadway community.

I put a call out on my FB asking for any recommendations of great ENT’s. One of my producer’s saw it and emailed me a name of the top vocal coach here in NYC, and told me to reach out to her.  I did just that and she replied to me pretty quickly and gave me the name of an ENT who happens to be one of the top in her field in NYC. Her name is Linda Dahl and she treats several of the Broadway shows, celebrity singers and tv/movie celebs. I was under her care for about a year and we did have to eventually do a surgery. The pathology results came back with a diagnosis of severe displacia. Nothing was cancerous in 2015. The nodes or polyps kept growing back at a rapid pace. Linda was at a loss and said she wanted me to see her colleague at the New York Head and Neck Institute.

I went to the NYHNI  in late 2015 and have been under the care Dr. Dennis Kraus ever since. Dr. Kraus and the team at NYHNI are ranked as some of the best in the field. I knew I was in good hands. Every six weeks I was going in to get scoped and the damn shit wouldn’t stop growing. I became a case that was discussed with several Dr’s and my case was discussed among panels of physicians looking for answers and ways to treat it. I personally didn’s want to keep having surgery upon surgery only to find nothing with each pathology report. On my second surgery with Dr. Kraus, the pathology came back as carcinoma insitue on my left vocal cord. What is carcinoma insitue? It is abnormal cells and the can be termed as pre-cancerous cells.

How did all this happen?

It was hard as hell to hear those words and then ultimately, Stage 1 Cancer. I wondered how this could have happened. Why did I need another surgery and then another surgery and yet again, another surgery! Why couldn’t any of these Dr’s who are supposedly in the top of their field get to the bottom of what was causing this. Just tell me I needed to stop drinking or eating something so it would go away. I would be on the phone with my Mom and just start crying because I was so frustrated at all of it.

Over the course of this, I put on over 50 pounds of the initial 80 I lost. I was down in the dumps and was ready to give up. I went to a naturopathic doctor, hoping to find some answers there. I had food allergy tests done. I took all kinds of supplements, and quit eating the foods I was allergic to. I cut out sugar, alcohol, gluten, bananas, beef, avocados, and all dairy. I was on tinctures for clearing the throat and the gut. Granted, I felt better about cutting those things out but unfortunately it didn’t help what was going on with the crap on my vocal cords. I tried to go back to exercise again, but only to achieve failure and embarrassment by walking into a place where I had done so well, and didn’t want to face judgment by those who were there.

Why couldn’t I catch a break? Was is genetic? Cancer runs in our family typically on the female side. My aunt had a double mastectomy, my Grandma died from ovarian cancer, her sister died from the same thing. My Mom had a battle with ovarian cancer and has been cancer free for over 25 years. My uncle had tonsil cancer a few years ago and is now cancer free. Do I yell and scream and give genetics hell for being the cause? Every question I asked really didn’t have an answer.

What was the universe saying to me throughout this winding road? Was there a reason I was losing my voice? The one thing I use everyday not only to communicate to people but the one instrument I have that brought me such joy through expression in music. I lost the ability to sing. I can’t sustain a note without breaking. I can’t sing a couple lines without my vocal cords aching. Was this what I had to face every time I wanted to express myself?

The reality is, I don’t know what caused this cancer. I may never know what caused it. It took me a long time to come to that realization. As humans, we want to know the reasonings behind things happening to us and we want to know now. This experience  has been a huge spiritual journey for me as well. Over the course of two and a half years, I have learned to be quiet and listen to my inner self. Sitting in silence for 3-4 days at a time were not easy at first. I would sit and cry, not just little tears , but I would cry rivers of tears. Over the course of the first couple of surgeries, I learned a lot about who I was as a person and about what mattered most to me.

I became in tune with my inner being. My inner being was begging to seen. My soul was being guided by this struggle to find truth and peace. Will this always be a struggle? I wasn’t sure how I would be able to to cope with not knowing what was wrong with me and if I would ever have a clear voice again. But it wasn’t for me to know at that time. You see there are some things that happen to us in life where there are no answers. We will never understand why certain things happen the way they do. We all inflictions brought upon us in this life and how we handle those can determine the outcome of who we become. I was trying to keep an openness to all things on the outside but the turmoil that was brewing inside made me scared. What if I have cancer or a disease that is not treatable? What if I die on the operating table? Those were questions going through my head each time I visited the Dr. and each surgery I had. My mind was going to darker places than I wanted to go to because no one could give me answers. 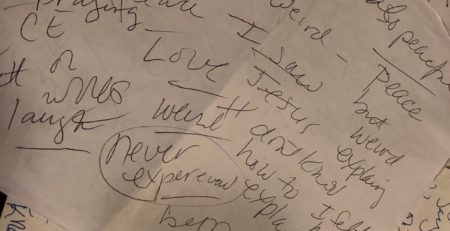 When one has a fear of something, it can become gripping. It can consume your whole being. No matter... read more

It’s ok to be scared.

It’s okay to be scared. Being scared means you’re about to do something really, really brave. This post does... read more

“There are two basic motivating forces: fear and love. When we are afraid, we pull back from life. When... read more