Rick Criswell is a motivational speaker, personal mentor, and CTA Certified Life Coach. Rick became a life coach  after having a 3 year struggle with vocal cord problems which led to cancer.  In November of 2016 during one of the several vocal cord surgeries, Rick had a near death experience on the operating table. During that surgery, Rick was given a vision and ultimately the peace to know that no matter what was being given to him on his cancer journey, he would overcome the fear and face the obstacle head on with grace, dignity, and love. Rick has been cancer free since November 30, 2017.

Master of Your Journey was born on that November day in 2016. The near death experience forever changed Rick’s life calling. His story is a compelling one which will take you on a journey to the ultimate reward of spiritual freedom.

Rick also serves in the role as the General Manager for the award winning Off-Broadway theatrical experience Sleep No More and the entertainment venue, The McKittrick Hotel in NYC. He joined the production immediately after it opened in early 2011.

Prior to Sleep No More, he lived in Tampa, Florida and worked at the David A. Straz Center for the Performing Arts (formerly, the Tampa Bay Performing Arts Center) as the Producing Artistic Director between 1996-2011.

Criswell’s career is multi faceted. He is a writer, director, motivational speaker, and audition/acting coach. He has directed several current and former Broadway and Off-Broadway performers and coached many young performers just starting their careers as well as those auditioning for high school and college placement programs.

Rick has directed projects for Kathie Lee Gifford and David Friedman, including the premieres Key.Pin.It.Real and Party Animals. Criswell served as the Project Director for Lucie Arnaz on An Evening with Lucille Ball and was the Project Director for the original premiere of the Off-Broadway show, Miss Abigail’s Guide to Dating, Mating and Marriage.

As a writer, Criswell has written and directed several cabaret shows throughout Florida and NYC. He has travelled extensively as a motivational speaker and in 1994, Criswell received a Points of Light Foundation Presidential Volunteer Service Citation from President Bill Clinton for creating and directing one of the first teen drama programs about HIV/AIDS Awareness.

Criswell is a graduate of Central Bible College where he holds a degree in theology and sacred choral music. He is a licensed non-denominational minister. 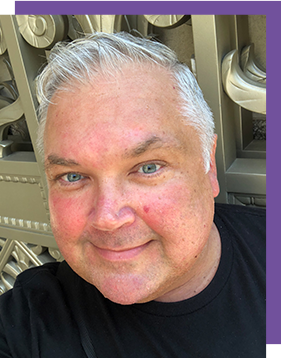